The forces that bond the atoms can be of two types:

The weak forces that held the molecules together are called intermolecular forces. The example of these forces are London dispersion forces, dipole-dipole interactions and most commonly known hydrogen bonding (present in water molecules).

The strong forces that held the atoms together in a molecule are called intramolecular forces. The examples are ionic bonds (NaCl) and covalent bonds (CH4).

There are two major types of intramolecular forces:

The bonds which are formed by sharing of electrons between two non-metals are called covalent bonds. The atoms can share one, two, three or four electrons depending upon the number of their valence shell electrons.

Most common examples of covalent bonds are the bond between Cl2, SOCl2, CH4 etc.

Covalent bonds can be divided into two parts depending upon the polarity of bonding atoms: 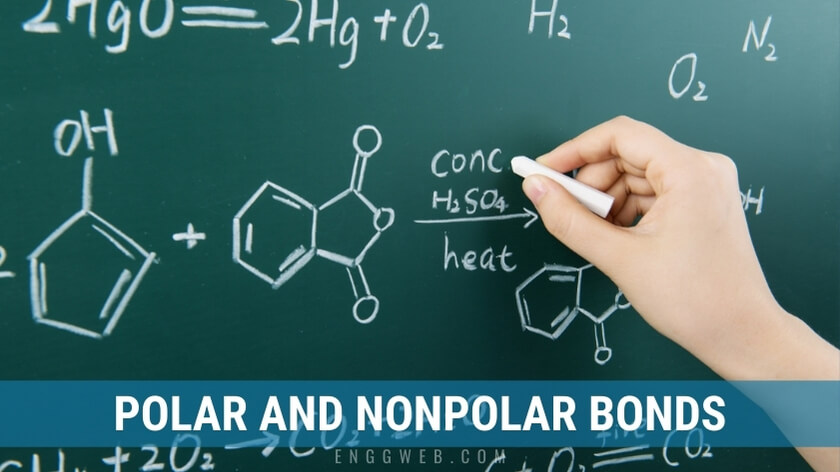 What is a Polar Bond?

A polar bond is a bond in which the shared electrons are unequally distributed between the bonded atoms depending upon the electronegativity of the bonded atoms. These bonds are unsymmetrical in nature.

The direction of increase in the electronegativity is donated by a crossed arrow.

What is a non-polar bond?

The electronegativity difference between two bonded atoms can also predict the nature of the bond.

How electronegativity difference predicts the nature of the bond?

Q=Magnitude of the partially charged atoms

r= Distance between the atoms

The diatomic molecules like halogens (Cl2, F2, Br2) have zero dipole moment as there is no charge separation. In case molecule have more than one bond, there will be a net dipole moment that depends upon the shape of the molecule (geometry).

Why H2O is polar? In case of H2O the central atom (oxygen) have two lone pairs which bends the O-H bonds and gives rise to bent or angular geometry. In the bent geometry the individual O-H bonds are arranged in a manner that they don’t cancel the individual bond polarities making it a polar molecule.

Given below are the Lewis structure of some polar molecules.

Figure 9: Lewis structures of some of the polar compounds.

Given below are Lewis structures of some of the non-polar molecules.

Figure 10: Lewis Structure of some of the non-polar compounds